i’m up all night

today was my first day off in four days. it sucks having to work overnight but heck what can you do, right. bla bla bla bad economy bla bla bla not having any relevant skills and a bad resume.

i searched desperately for things people do on their weekend and found one example. 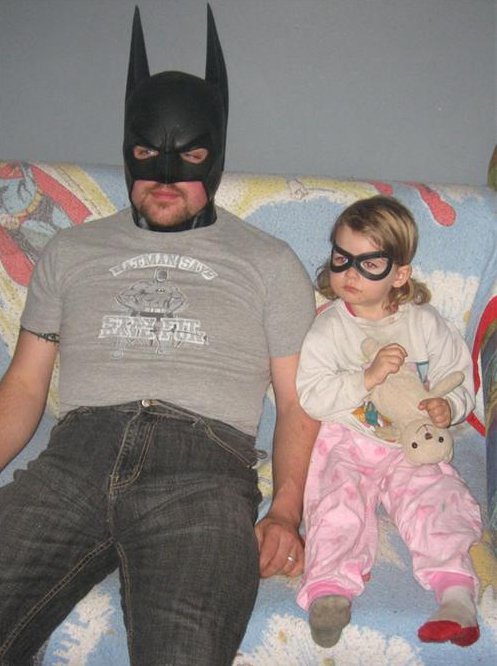 this fella sits on a batcouch wearing a latex mask with his daughter (i assume). he should feel terrible about himself because everyone knows batman and catwoman (what his daughter, again i assume, is dressed up as) have the hots for each other. i mean they’ve kissed like ten time in the comics. gross dad alert.

i decided to try a new beer instead of pulling a Humbert Humbert. i took a stroll to the nearest boozer.

i bought a lager. it came with a stein.

i was at the lcbo, the one on dundas/spadina with the crazy old piss smelling men outside, deciding on what new beer to try. i picked up a scottish ale thinking ‘oh yeah’. i’ll like this. sounds like it’s

that couldn’t be bad. i walked around with the cans of that and felt content until i walked past a limited edition of something called ‘Paulaner Munchen Oktoberfest Bier‘. (on their website, go past the first page and there’s a funny animated lady. i couldn’t understand anything after that so i left.)

this is what it looked like and why i just had to have the deal (thanks for the picture http://beerbeer.org)

it’s a litre can of beer. it’s an oktoberfest beer stein with a 1L can of lager inside. just look at the picture. i wanted to pull a homer simpson. i put back the Scottish ale (sorry Arab Strap) and picked up this hulking $13.45 thing because of the glass thing. i couldn’t say no because i have a thing for complimentary/limited edition glasses (i blame my dad and his stupid collection of juice glasses that came with V8 vegetable juice in the nineties).

what i know of oktoberfest

oktoberfest, from my understanding based off pop. media, is a festival that has run for two hundred years and now features pale lager and scantily clad hoes. They serve 17 million litres of beer to people over two weeks, so i’ve got no problems with it. i just want sausages now. here’s a picture i found showing what allegedly happens in munich. 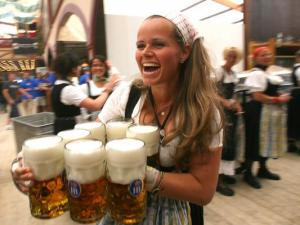 look, a hoe. i myself worry about male pattern baldness but I have no idea how she deals with it. if you know how i can contact her to ask her please let me know. does munich beer head taste good? i like it when i’ve a lot of head on a stout but i don’t know about these lager heads. anyways.

i dislike lager. i think it’s boring and i think the golden colour it shares with made-from concentrate-apple-juice is no incidental fact but a weirdly logical metaphor (if that’s possible). it looks like the pee because it tastes like not much. i just couldn’t refuse this lager because of the package.

i cracked open the can. it did not smell good. i like beer to smell like fruits and coffee and stuff. i thought, here we go, a beer molson canadian modeled itself after. after a sip from the giant glass i found myself corrected. this lager had none of the issues with north american lager. it’s like the water they made this from hadn’t gone through the city of toronto water services percolators (the machines that turn toilet water into drinkable water, ya boo). the hops had me thinking of how farming might have been 200 years ago, clean, and the finish was so clean i didn’t make a face.

the thing that came most to mind was pears. do you like pears? they’re subtle. compare pears to peaches in your head. they’re different, right? this beer’s a pear.

so there. go get it. it’s pricey for 1L of beer but you get a fucking glass thing to drink it out of. the mug weighs so much it hurt my wrists. i guess this is where being a german hulk would help out. by the end of the one can you’ll be tipsy (if you weight 150lbs).

i meant to ask this the entire time but was too distracted by the large women on the can design. what’s your favourite kind of brew? i swear i won’t hold it against you.

then i fell over

Error: Twitter did not respond. Please wait a few minutes and refresh this page.